After a good 5 years, our smart electric drive went already over 200,000km. We are still excited about how little maintenance and how much fun you can have with a car. In this post I would like to tell you about the highlights and why it is an entry-level drug. when we became our smart ED3. With wide eyes we where watching as it rolled absolutely silently down from the truck into our driveway. My parents had ordered it out of pure curiosity after they test drove one once ore twice.

That's why my parents knew nothing about electric cars. Only that it's a lot of fun. Getting from A to B with the smart wasn't clear yet. But the seller said, 230V-outlet is enough for charging. We already had that for the vacuum cleaner in the garage and so we had everything we needed. Everything else we found out just by trying. In summary, electric car driving is super easy, but of, it's not the same as driving a ICE car. But that's a good thing

Meanwhile I've been 15 years old and the smart was cool, but cars in general still too far away for me.

When the second car becomes the first car 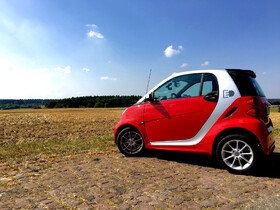 Originally the smart car's purpose was driving my mom to work and back on one charge. But, it didn't take long till everybody at home wanted to drive the electric car so our first car only drove when there was no other solution.

The smart was great, but it was without the 22kW fast charger, besides, it was just a two-seater. In the summer of 2014, we went for a family vacation with a Renault Zoe to Austria. We liked this very much and than bought one in 2015. We were now fully electric. On my 18th birthday, thanks to all my grandparents, I got the smart electric drive. It's my first own car, as a result of which I can not refuel ICE cars until today and I have no plans to learn it at any time.

I got the smart with the promise of my parents in fast charging cases to be able to borrow the Zoe. But soon it turned out that I would much rather drive with my smart. Even if it only recharges 20km an hour, it just has more character and is a lot of fun. 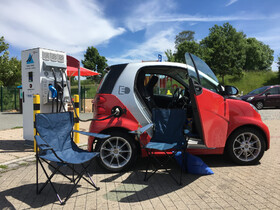 The first distanced destination was in the heart of Switzerland. I went to a electric car meeting with my grandpa in Bouchs.

It was not long then, I wanted more. A friend and I made our way from Stuttgart to Berlin to the Formula E (about 650km/400miles one way). An unforgettable and great trip. Three days to Berlin and three days back. Pure relaxation, not suitable for everyday use, but a great trip. There also happened the picture on the left, you just got inventive if you wait for your car when it's windy. Wind shadow charging is what we called it.

I then where sure, that I want to travel in the future with the electric car. Despite the 3,7kW-charger, I have made many nice trips with the smart and got to know great people. It was also great to watch over time how there where more and more charging stations. Since 2016/17 we are at the point that you can go anywhere, even with a city car like the smart electric drive. That's why I than took my smart EQ even to the most northern point of Europe...

The kilometers just tumbled through, as the 100,000km were reached we really did not think it would go on like that as we later also got a Tesla. But it was just great fun. In the beginning, my mother was still busy collecting kilometers while commuting, later my father and I. For the last 5 years, my father has been responsible for Autobahn construction site congestion around here and used the smart to get around. 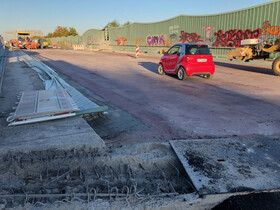 In construction supervision, you not only have to coordinate and check, but you also have to drive a lot. So it happened that the smart continued to collect miles and the construction site kept going. I thought it was funny when my father once said that he had misjudged his reach, but instead of recharging, he drove slowly over the construction site and "inspected everything conscientious" until he finally got to his chargingpoint.

Before and after the construction sites the smart was traveling with me again to all sorts of things that occurred to me so spontaneously.

In what shape is the smart now, after that many miles? Repairs?

It's still looking like it did at the first day. Literally. At the beginning of 2017 had a small accicent. New plastic parts where needed. The color fit perfectly, can't tell what they had to replace for sure. Shortly after the successor came out, I was asked at a meeting of electric car enthusiasts if it is the new smart.

But let's start from the beginning:

Service is once a year, or every 20,000km, depending on what is first. Included in the inspection price is a replacement car and they wash the smart. In addition, they had to replace the break fluid every 2 years, that's a statutory requirement here. The average 200 € / inspection are a good price, especially when you consider that we went for everything to the Mercedes dealer.

Otherwise, any significant costs incurred when buying tires, every 40,000 km is a set down. Four tires together, also from the Mercedes dealer, are for about ~ 370 €. Then already installed on the car.

All in all, the maintenance of the smart electric drive is very, very favorable. At 100km it needs about 4€ of electricity.

And the battery pack?

After 200,000km it still has roughly 90% of remaining capacity (More details about that here). That the battery is doing so well it's still a surprise to us as well. You have to keep that in mind:

What we also want to emphasize clearly:

We never treated the smart particularly well, after all, it's just a car. My parents originally leased it for 2 years and drove it without being considerate. After the 2 years, we bought it and still drove without any considerate. It's a fun car and that's how we drive it. 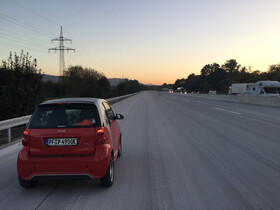 If we were to buy it again today, we would also have just choosen the 22kW charger. That's the reason why we now also have the new smart car with 22kW charger. Now also having a Model S in family, we still love driving the smart and it's not a rare sight that we rather take the smart. It's just such a fun car.

We are thrilled and you can be sure that we will drive it until it's falling appart. This car will never ever leave the family in one peace.

Product
Battery tool
Hard- and software to read out your smart ED & EQ
starting at EUR 139.96